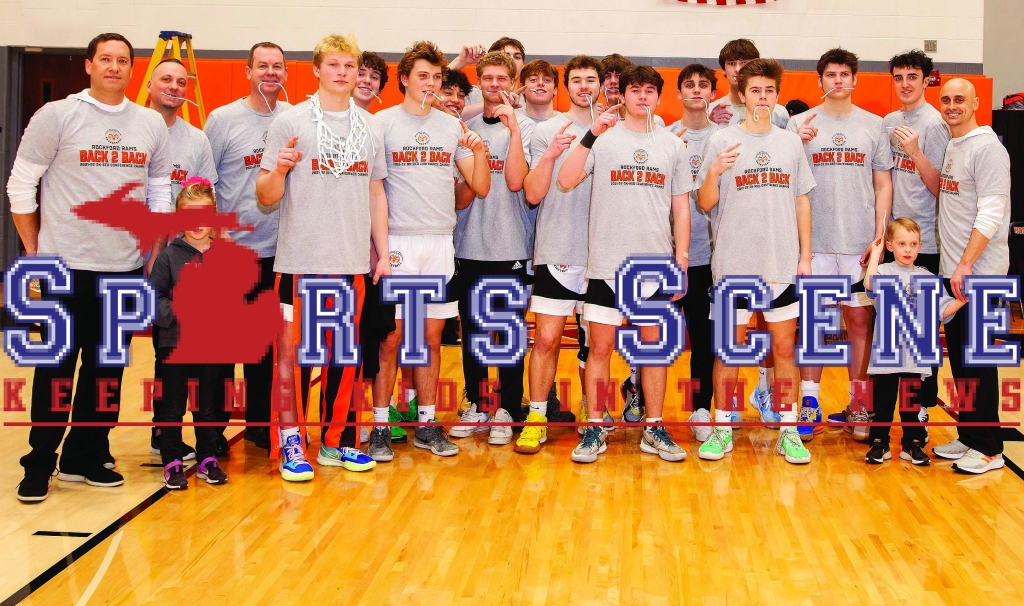 Butch Harmon
Sports Scene
The Rockford boys basketball team has been on a roll the past several seasons and this year the Rams are turning in another big season.
Champions of the rugged Ottawa-Kent Red Conference last season, the Rams made it two in a row this season as they finished league play with a 13-1 record. The entire regular season was a productive one for the Rams who finished the season with an impressive 18-2 record. Rockford’s lone loss in conference play was a 54-51 loss to conference runner-up Grand Haven while the only non-conference loss was a loss to Detroit Catholic Central over the Christmas holidays.
“This has been an incredibly memorable season,” said Rockford coach Kyle Clough. “To win the OK Red championship for a second-consecutive year, finish 13-1 in league play and 18-2 overall, is quite an accomplishment by these young men. More importantly, they are great people and coaching the has been a real honor.”
The Rams have played consistent basketball the entire season. Rockford opened the season with three consecutive wins including non-league wins against Grand Rapids Union and Lansing Everett.
The win against Union was especially noteworthy as Rockford won the game 54-51 in overtime and that game also received national attention on ESPN Sportscenter.
“Against Grand Rapids Union we stole a pass and Andrew Landis, a sophomore, made a half-court buzzer beater to win,” Clough said. “It was pretty incredible and ended up number two on the top 10 plays that night on ESPN. The only play ahead of it was Steph Curry breaking the all-time, three-point record.”
After the loss against Detroit Catholic Central at The Showcase at Cornerstone University, the Rams reeled off 12 consecutive wins. Included in the winning streak was a win against Grand Rapids Ottawa Hills in the Jam at the Van at VanAndel Arena in downtown Grand Rapids and a win against Forest Hills Eastern also at The Showcase. Following the loss to Grand Haven, Rockford responded with five wins to close out the regular season and clinch the conference title.
“We have had a lot of highlights this season,” Clough said. “Playing at VanAndel Arena earlier this year, finishing 13-1 in league play and getting to the district title game.”
Key to Rockford’s success this season is a roster that features plenty of versatile and talented players.
“This team has tremendous balance and depth,” Clough said. “We have seven guys who average six points per game or more and we’ve regularly played nine guys in our rotation. They do not care who gets the credit, or scores more, they just want to win.”
Rockford is led by a trio of all-conference players in Jack Lamancusa, Kyle Varady and Caden Pokorzynski. Charlie Deutsch is also an all-conference, honorable-mention player.
“These guys have been dynamic for us,” Clough said. “We had also had six different leading scorers during the season.”
The team work and effort that the players have displayed this season has made this team a pleasure to coach for Clough.
“This team has just been a joy to coach,” Clough said. “We lost our two most experienced players prior to the season and these guys have just stepped up and been a resilient bunch.”