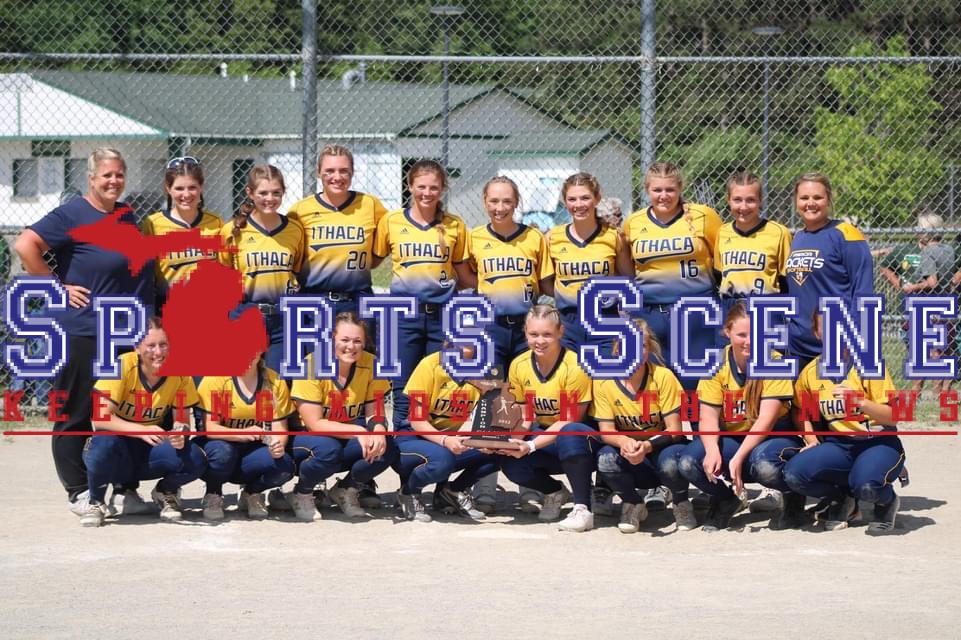 The Ithaca Varsity Softball team was in the district tournament on Saturday, June 4th and won it.

Coach Shelby Shankel: “We had a solid offense in this game, pulling in 15 hits on the game. The offense was led by Megan Mankey and Faith Fisher each with 3 hits. Following behind were Ivy Davenport, Lauryn Humphrey, and Emmalee Shankel each with 2 hits, while Alyssa McPherson and Madison Carman each added 1. Big hits were Mankey’s center field shot in the second inning, and Fisher, Humphrey, Davenport and Mankey’s doubles.

“Kennedi Ryan sealed the win on the mound, pitching all 6 innings, only allowing 1 run, striking out 6 and walking 1.”

Coach Shankel: “In the championship game we faced Central Montcalm. The Jackets came out once again with a strong offense, tallying 9 hits on the game. The offense was led by Emmalee Shankel with 3 hits (including a triple). Alyssa McPherson added 2 hits, while Kennedi Ryan, Ivy Davenport, Megan Mankey, and Myah Maurer all added 1.

“The defense was led by Ivy Davenport’s strong pitching in the circle. Davenport threw all 7 innings striking out 7, and allowing 0 earned runs. There were at least 2 times where Central Montcalm had bases loaded and Davenport was able to pull off strike outs to end the inning. Davenport threw a strikeout to end the game and seal the deal for the Jackets.

“The Jackets played well offensively and defensively all day.

“The Jackets have not won a District Title since 2013.”