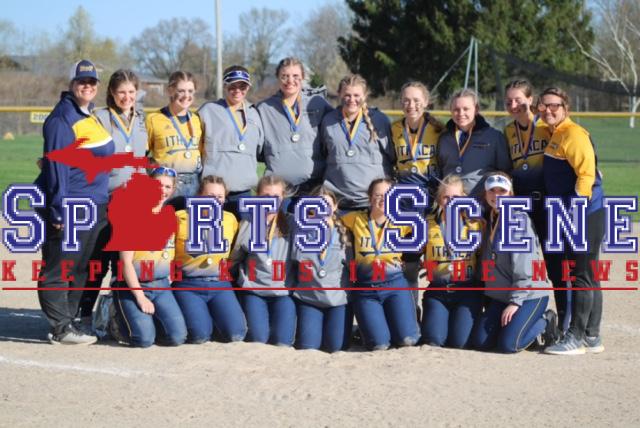 Coach Shelby Shankel’s Ithaca softball team continues to play well.
On May 5, the team headed to Standish Sterling.
Game 1: Loss 1-3
Leading the offense was Megan Mankey, Kennedi Ryan, Alyssa McPherson, and Madison Carman each with 1 hit.
Ivy Davenport pitched in game one, striking out 6 and only allowing 1 earned run and walking 1.
Game 2:  Win 10-9
The Yellowjackets had an exciting 2nd game on the night.  Alyssa McPherson’s single in the bottom of the 7th inning tied things up at 8. The game went into extra innings with the international tie-breaker in effect. With bases loaded, in the bottom of the 8th, Megan Mankey hit the walk-off single to win the game. Leading the offense was Alyssa McPherson with 3 hits on the game. Mankey, Lauryn Humphrey and Quinne McMurphy each added two hits, and Ivy Davenport, Emmalee Shankel, Madison Carman, and Myah Maurer each added one.
Defensively, Lauryn Humphrey started the game, pitching two innings. Kennedi Ryan earned the victory on the rubber allowing zero runs, striking out 6 and walking 0.
The Jackets headed to the Carson City Invite on Saturday where we took home the Championship!
Game 1: 8-7 win over Evart/
The Jackets faced another exciting finish. Playing Evart for the 3rd time of the season the Jackets held a steady lead, 8-2 until the fifth inning when Veronica Lofquist smoked a grand slam, moving the score to 8-6, and then a single was hit by Ally Theunick in the seventh to put them down just 1 run. ‘Our Lady Jackets are tough, however, and played some great defense to seal the win in the bottom of the 7th inning,” Shankel said.  ]”The offense was led by Kennedi Ryan who raked in 3 hits. Ivy Davenport, Megan Mankey, and Emmalee Shankel each had some solid hits with two each, while Alyssa McPherson and Myah Maurer each had 1. Key hits were Ryan’s triple, Mankey’s two triples and a double, and then Maurer’s  and Shankel’s doubles.
Defensively, Davenport and Ryan led the way for the Jackets. Davenport pitched the first 3 innings, striking out 5 and walking only 1 batter. Ryan relieved her in the 5th inning and struck out 1, allowing no walks.
Game 2: Win 14-7 over St. Louis.
The offense was led by Emmalee Shankel, Kennedi Ryan, and Quinne McMurphy each with 3 hits. Alyssa McPherson added 2 hits, while Megan Mankey and Lauryn Humphrey each added 1.  Key hits were Kennedi Ryan’s solo shot in the 6th inning, as well as McMurphy’s, McPherson’s and Ryan’s doubles.
Lauryn Humphrey started for the Jackets, pitching 4 innings and striking out 2. Ryan came in to finish the game striking out 1 and allowing 0 earned runs.
The Yellowjackets current record is 15-5. This week Ithaca faces Central Montcalm (away) on Wednesday the 11th and Hemlock home on Friday the 13th.