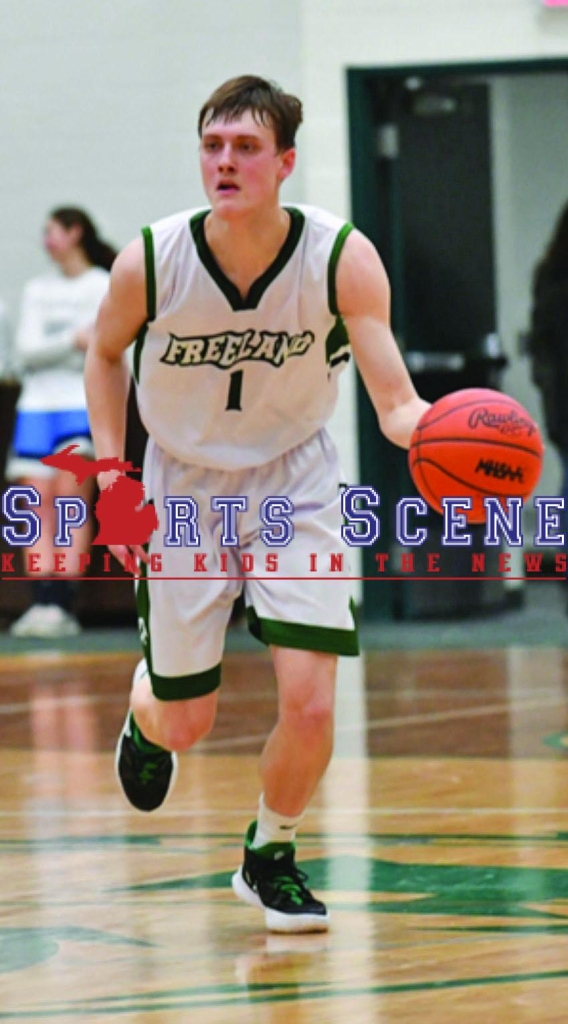 John Raffel
Sports Scene
Josh Elliott played no small role in a sensational regular season for Freeland’s boys basketball team this season.
A 72-45 win over Sanford Meridian on March 1 clinched a 20-0 regular season for the Falcons.
It’s Elliott’s third year on varsity and has been his best year. After 18 games, he was averaging 19 points. 3.5 rebounds and 3.5 assists per game and shooting 58 percent from the floor, 47 percent in threes and 91 percent in free throws.
There’s been a clear reason behind Elliott’s success.
“We had a summer in the offseason and I was putting in work at the local gym,” Elliott said. “I’ve been looking to be a leader, run the show and make the best decisions for our team.”
He had 30 points in a win against Alma and he’s had some others in the high 20s.
“I like to get to the rim and shoot threes,” he said. “I’m mainly a three-point shooter so most of my points come from there.”
The key to being an effective three-point shooter “is repetition, mainly,” Elliott said. “I worked during the offseason getting tons of shots up.”
Shooting is not Elliott’s only forte.
“We don’t have a true point guard so I’ve tried to take on the role this year,” Elliott said. “I try to find my teammates for good looks and make it tough for the other team to set up its offense and set the tone for our defense. Usually when teams press us I’ll handle the ball.”
Elliott said coming into the season, Freeland had nine seniors who had played together for a long time. The expectations were high.
“It’s been our chemistry,” he said. “Most of us have played together since the fifth grade. We know when someone is going to be open. We work well together.”
An impressive late season win for Freeland was 63-57 over 16-4 Pewamo Westphalia at P-W.