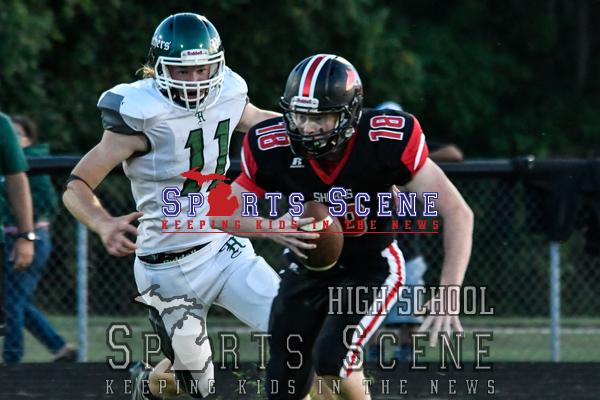 ROCKFORD 3-0: Enter rugged two-game stretch of the schedule with Grandville and Hudsonville coming up.

GRAND LEDGE 3-0: Comets off to their best start since 2015 season thanks to a potent offense that has scored five or more touchdowns in each game.

HOLT 2-1: Rams face a major test this Friday as they take on DeWitt.

EAST LANSING 1-2: Trojans have faced a rugged schedule so far this season and things are not any easier this week with 2-1 Portage Central in the way.

DEWITT 2-1: Bounced back from Portland loss in a big way with an impressive win against a quality East Lansing squad.

MOUNT PLEASANT 3-0: Oilers have a tough two-week stretch coming up with games against Dow and Midland.

BAY CITY WESTERN 3-0: Western puts it undefeated record on the line against a Saginaw Heritage team that is looking to rebound after a tough loss to Lapeer.

CHARLOTTE 3-0: The last time Charlotte started the season with a 3-0 mark was in 2004 when the Orioles eventually reached the state semifinals in Division 3.

ALMA 2-1: Rebounded from a tough loss to Freeland with an impressive win against a previously undefeated Bay City Glenn squad.

BAY CITY GLENN 2-1: Face a massive challenge this week in a Frankenmuth squad that is beginning to roll on offense.

WILLIAMSTON 1-2: Hornets take on a tough Fowlerville squad as they look to snap a two-game skid.

PORTLAND 3-0: No letdown for the Raiders who came up with a solid win against Ionia after the emotional win against DeWitt in week two.

LANSING CATHOLIC 3-0: Cougar offense is starting to hit on all cylinders.

FRANKENMUTH 3-0: Eagles take on John Glenn this Friday with the showdown against Freeland coming up in week five.

FREELAND 3-0: It’s showdown time in the Tri-Valley as unbeatens Freeland and Essexville-Garber clash this Friday.

ESSEXVILLE-GARBER 3-0: Undefeated Dukes face a major challenge as they put their undefeated record on the line against Freeland.

GLADWIN 3-0: Flying G’s have looked dominant this season winning their first three games by a combined score of 180-0.

OVID-ELSIE 2-1: Marauders are for real with an impressive win against Montrose and a tough seven-point loss to Portland on their ledger.

BULLOCK CREEK 2-1: Lancers looking to get back on track after a tough loss against Standish-Sterling.

MILLINGTON 3-0: Cardinals face a major hurdle this week as it takes on undefeated Standish-Sterling.

MONTROSE 2-1: Ram must quickly regroup from tough loss to Ovid-Elsie as undefeated rival Chesaning provides another big challenge this week.

CLARE 2-1: Pioneers are rebounding in a big way after a tough loss to Freeland in the season opener.

PEWAMO-WESTPHALIA 3-0: Pirates are in mid-season form with a high-scoring offense and dominating defense.

NEW LOTHROP 2-1: Defense has been big for the Hornets with shutouts the last two weeks.

SAINT LOUIS 3-0: Sharks are a big-play team on both sides of the ball highlighted defensively by Ben Dousuah who has returned two interceptions for touchdowns.

LAINGSBURG 2-1: Wolfpack have sandwiched a pair of solid wins around a tough loss to powerhouse Pewamo-Westphalia.

ITHACA 1-2: Got in the win column in a big way after opening the season with a pair of defeats against undefeated Hudson and Standish-Sterling.

BRECKENRIDGE 1-2: Face off against Coleman what should be a dandy of a game in the Mid State Athletic Conference.